This is a very graphic and lucid explanation of what exactly is White Genocide.  The liberals would love for us to believe that it is all a coincidence and that no White Genocide is intended.  They’d love for us to believe that in their quest for a Global community, Whites are proving unable to adapt and are becoming extinct due to Evlution through natural selection (the Darwin Theory).  Even if that’s so, according to Darwin, all species have a right to fight for survival.  Even he didn’t expect a species to just “accept the inevitable” when they found themselves being replaced by anther species, and neither should we.

We must fight for our survival or else we will have been chosen for, and deserve extinction.

Pro illegal groups attended the LA County Supervisors meeting and those opposed to the 12/20/16 motions that have been passed by LA County Board of Supervisors to shield people illegally in the county from Trump’s incoming administration. The county passed a motion to provide legal services to those facing deportation that will take millions of taxpayer dollars as well as a new Department of Immigrant Services a that will also take millions of taxpayer dollars. Video by Robin Hvidston We The People Rising.

Now I understand that many National Socialists could never work with Blacks on anything, and I’m not suggesting we should.  I think that would just be too difficult for many of us on both sides.

All I’m saying is when it comes to illegal immigration, Blacks and Whites have a common enemy, and for us to be fighting each other is sheer madness.

We’re relentlessly told that we must “never forget” the “Six Million” victims of Hitler and the Nazis. But we hear far less about the vastly greater number of victims of Lenin and Stalin, and the grim legacy of Soviet Communism.

Some 20 million people perished as victims of the Soviet regime, historians acknowledge. Jews played a decisive role in founding and promoting the egalitarian-universalist ideology of Marxism, in developing the Marxist political movement, and in brutally establishing Bolshevik rule in Russia.

With the notable exception of Lenin, who was one-quarter Jewish, most of the leading Marxists who took control of Russia in 1917-20 were Jews, including Trotsky, Sverdlov, Zinoviev, Kamenev and Radek. The Bolshevik killing of Russia’s imperial family is symbolic of the tragic fate of Russia and, indeed, of the entire West.

Coincidence that they were mostly Jewish?  That’s what they’d like you to believe.  If you do believe it, are you interested in buying the Brooklyn Bridge?  I won’t charge too much.

This has got to be the best documentary about the Holohoax that I have ever seen.  It’s a long one – about four hours and 15 minutes, so make plenty of time or watch it in sections.  They concentrate mainly on what really happened at the Operation Reinhard Camps:  Treblinka, Belzec, and Sobibor, which adds up to about 2 million people, or one third of the Holocaust.  This film shows logically, scientifically, and mathmatically how it is impossible that so many were killed there in so short a time.  Surely some were killed but nowhere near what is claimed.

They also catch several “witnesses” in bold faced lies.  These lies have been proven to be lies.

They use visuals like maps, models, and photographs quite extensively.  It is extremely well documented and presented.

Once those who still believe in the Holocaust see this film, they may not become revisionists, but they won’t be able to start doubting the official Holocaust lore that we are programed to accept as Gospel.

The first few minutes SEEM like they are saying the Holocaust happened, but they are just going over the “official” story about what is CLAIMED that happened in the Operation Reinhard Camps before they begin to debunk the story.

For those who don’t know, Operation Reinhard was named after Reinhard Heydrich, Chief of the Gestapo and SD under Heinrich Himmler.  Heydrich was assasinated in Prague in 1942. 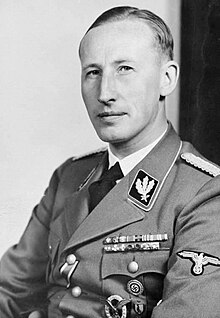